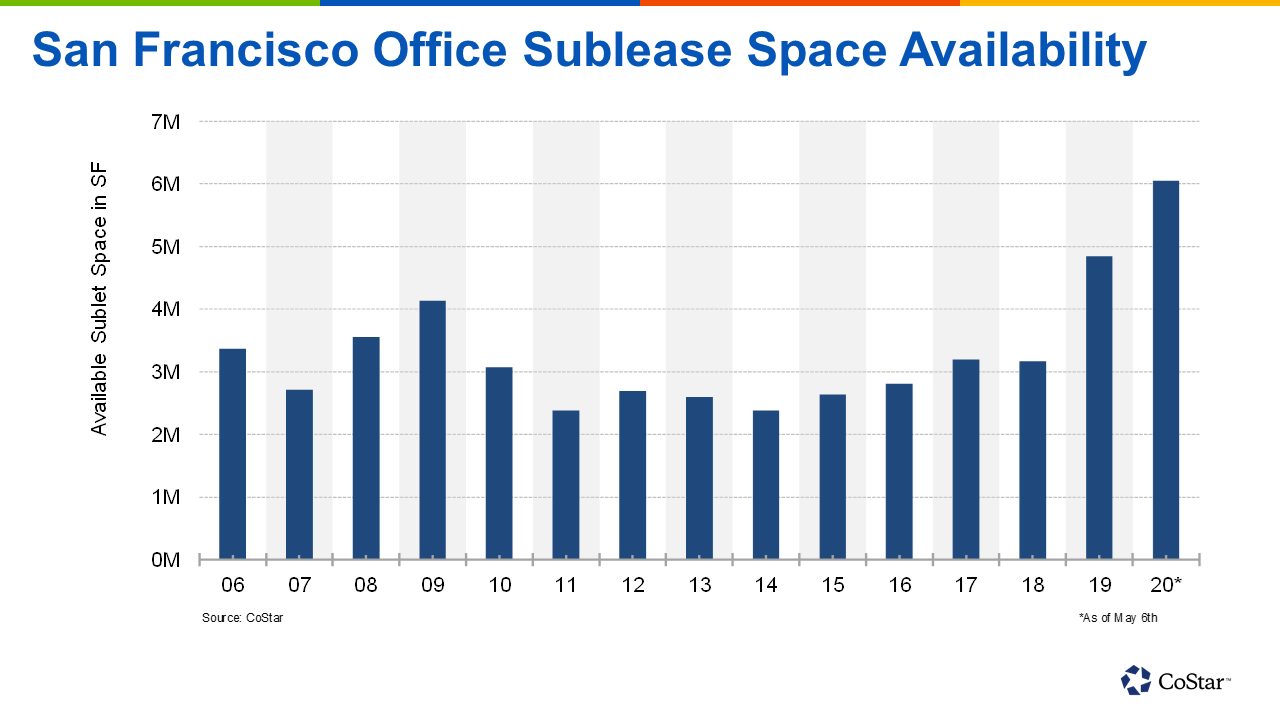 If you’re currently looking for office space in San Francisco, there’s a good probability that you’ll be considering a sublease option. Roughly 30% of the available space in the market is listed for sublease from an existing or prior tenant, rather than from a landlord directly.

The rise of sublease listings in San Francisco can largely be attributed to cost-sensitive businesses leaving the market, as well as technology tenants banking space for future growth or coming to the realization that they will not fulfill aggressive growth plans. And now, victims of the coronavirus pandemic’s shelter-in-place and social distancing measures have begun to shed space as well.

New listings in the market include 55 Hawthorne St., where KeepTruckin has offered 34,108 square feet for sublease. The unicorn startup that helps truck drivers log hours laid off 349 employees in April, or 18% of its global workforce.

Credit Karma moved into the Phelan building at 760 Market St. in 2014, and expanded in 2017 to a footprint spanning 121,000 square feet. In February, the company listed two floors for sublease, totaling 24,320 square feet.

Macy’s announced plans to close its tech offices in San Francisco and is moving positions to New York to streamline operations. Accordingly, Macy’s.com listed its office at 680 Folsom St. for sublease in January. The eight vacant floors total 272,401 square feet, encompassing half of the building. Macy’s employed 880 full-time workers and about 200 contractors in the building.

At 795 Folsom St., the defunct robotics-enabled Zume Pizza has offered 64,177 square feet for sublease. The start-up cut 80 San Francisco-based positions in January and shut down pizza delivery operations after four years in business.

With tech firms in hard-hit segments of the economy slashing jobs and small businesses clamoring to obtain payroll protection loans to stay afloat through the recession, it’s likely that sublease space will continue to flood the market in the year ahead.

In the first week of May alone, Airbnb announced the termination of 1,900 employees, or roughly one-quarter of its workforce, and Uber said it is slashing 3,700 positions, or 14% of its workforce, while Juul recently announced plans to move out of the city and cut roughly 25% of its U.S. staff of 1,800. All three firms expanded offices in the city substantially during the expansion cycle.

Exacerbating the effect that severe job losses and business failures will have on demand for space in the San Francisco office market, a CoreNet Global survey conducted between April 22th and 27th found that 69% of end users surveyed say that their company’s real estate footprint will shrink as a result of increased work from home. With excess space on hand, even tenants that survive the recession may consider subletting portions of their offices to others in order to recoup costs.